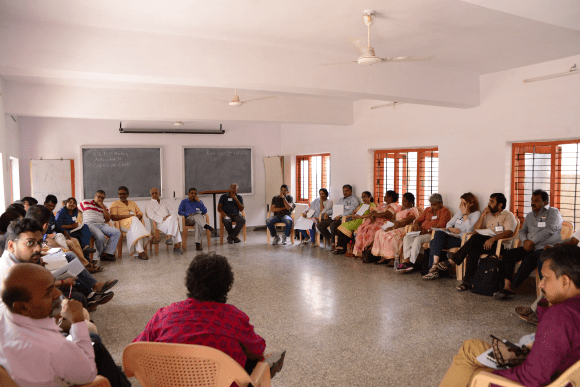 The Fair Climate Network has held 8 formal meetings to date. Besides, we have met more than 20 times, in smaller groups, on specific topics and issues. Meetings of the Fair Climate Network are purely voluntary affairs, with no outside funding. Members meet their own travel costs, and ADATS hosts them with simple food, basic accommodation, and a warm welcome.

From 2006, an informal grouping of grassroots NGOs had organically evolved around ADATS to share CDM experiences and enable them to tap carbon resources through sharing, facilitation and handholding.

Icco/KerkinActie had a decade long experience in discussing climate change and climate justice issues with about 15,000 active supporters who collaborate with them in various schemes under the title Climate Plan.

A propitious opportunity offered itself to link the efforts of Icco/KerkinActie with the ad hoc and hopscotch efforts of ADATS to create a North-South network. To further explore this opportunity, the Bagepalli FCN Meeting was held on 14 and 15 September 2007 at ADATS Campus, Bagepalli.

This first meeting was attended by 28 participants, including development workers from every part of India and abroad. Gert de Gans and Ram Esteves explained climate change and CDM, respectively. Ram Esteves was selected as the Convenor, with Gert de Gans and as co-Convenors.

The Report is an inventory of NGO capacity vis-à-vis CDM. Click here to read more.

A one day meeting was held at Bagepalli with just 7 participants, where it was decided that the Fair Climate Network would act as an independent entity. Icco who would be an equal and participating Member. EED, Norwegian Church Aid, APRODEV, and other northern NGOs would be invited to join the Network.

We set targets to develop pro-poor CDM Projects and decided we need a CDM Specialist to assist grassroots NGOs with technicalities. We would also need experts in a wide range of specialisations to volunteer services, pro bono. We identified the need for a bridging fund to give soft loans to Members to cover shortages they would face in meeting high transaction costs of CDM preparation.

A 1 day meeting for which a large number of participants arrived the previous afternoon to visit villages in Bagepalli and gain a first hand appreciation of community ownership and participation in CDM.

On Thursday, 6 March, shared the exciting news that the Icco would like to finance the wish list of the FCN, as articulated in the previous FCN Meeting. The broad strokes of this offer were discussed.

A team of scientist from TNO, the Netherlands, explained the carbon potential scan they were undertaking. This did not excite the meeting, since participants felt that which such a scan may be useful to arrive at a wider policy, it was not particularly pertinent for grassroots efforts.

The wisdom in Icco floating a carbon investor company, and its relationship with pro-poor CDM Projects developed by the FCN, was also discussed in great depth.

In order to retain autonomy and independence, it was unanimously decided that Members would contribute 1% of their carbon revenue to the Fair Climate Network. ADATS pledged 2%.

A half day meeting was hosted by SEDS at Anandapuram. 9 Network Members explored the possibilities of bringing sustainable agriculture within the realm of CDM. Kanal explained the CDM cycle, and Sudha enumerated existing methodologies.

We came to the sobering conclusion that there wasn't much scope to interpret existing practices of grassroots NGOs within CDM. In spite of that, we decided to list all our current practices in organic farming, low external input sustainable agriculture, permaculture, et al, and re-examine possibilities once more.

Yet another largely attended meeting at Bagepalli where we shared CDM preparation experiences thus far, and quickly moved on to discuss Icco's proposal to finance the Network's Tech Team. There were heated discussions on Icco's role, intent, perceived threats to the independent functioning of the Network, and position of non-Icco partners.

It was unanimously and categorically decided that the FCN would, come what may, remain an independent, open and welcoming Network. Senior and experienced participants insisted that we needed to structure the Network even while retaining the non-institutional nature of it. A Core Group of 7 persons was named, with ADATS as the Secretariat.

Mahesh Jain and V. Rangan held a riveting session on what Carbon Investors would look for. NGO preparedness to deal with commercial money was critically discussed. This was followed up with a detailed presentation by Sudha on methane avoidance and sustainable agriculture in CDM. Nafisa and Walter spoke on the upcoming CoP15 at Copenhagen. The meeting ended with each participant making commitments on what they would do in the coming months to develop pro-poor CDM Projects.

Once again, a largely attended meeting with 53 participants present at Bagepalli. This Meeting was dedicated to Fr. Vincent Ferrer, who passed away on 19 June 2009 at the age of 89 years, after 65 years of service to the poor.

The final draft proposal by Icco to support the setting up of a Tech Team at Bangalore was shared, finalised and approved by the Members. In the meanwhile, the FCN has already set up a scaled down Tech Team service with the appointment of Sandeep Loya, mentored by Sudha Padmanabha and guided by Ram Esteves. These efforts would be absorbed into the Icco financed plan and budget.

T. Pradeep shared a breakthrough made in fuel efficient woodstoves technology for CDM. Participants examined how these could be financed by existing micro finance setups, without forward funding from any Carbon Investor.

The second day was dedicated to presentations by Richie Ahuja, Sudha and Kanal on Low Carbon Farming. It was decided to set up a long term collaboration between Environment Defense Fund (EDF), New York, and the Fair Climate Network.

On 29 January everyone met at the Tech Team office in Bangalore to explore possibilities of a collaboration to interpret these SA practices as emission reduction, generate carbon credits and sell them in the offsets market.The FCN-EDF collaboration took roots in this meeting.

A month later, 5 Participant NGOs (Accion Fraterna, SEDS, SACRED, BEST and PWDS) and EDF got together at Bagepalli to form the FCN-LCF Coalition Programme, under the guidance of the Fair Climate Network.

A full day meeting at Bagepalli followed up on the previous meeting. After reviewing past efforts in trying to link agriculture with carbon credits, the role of EDF to provide the science needed for Low Carbon Farming was fully discussed. Participant NGOs got a clear understanding of the long haul — scale, time-frame, objectives, goal, purpose, etc. It was decided to take the LCF Coalition Programme forward in a phased manner.

12 Representatives from the 5 Participant NGOs, including their leadership, attended a 2 days workshop facilitated by Ajit Mani of Interventions (India) Pvt. Ltd. to draw up a 10 year Strategic Plan for the FCN-LCF Coalition Programme.

Together they listed the Core Values and underwent an exercise to articulate the Vision and Mission. After that, a Stakeholder Analysis was done and an Importance-Influence Matrix developed. A SWOT Analysis led them to derive the Strategic Priorities. Then followed the Problem Analysis and Objectives Analysis in order to construct the Trees and 4 x 4 Project Planning Matrix with Goal, Purpose, Outputs and Activity Processes.

This last had already been done in great detail by the Participant NGOs, with Activity Processes, Tasks, Jobs, Costing and Source.

Once again, 12 Representatives from the 5 Participant NGOs attended a day long meeting to finalise the project application and budget to be submitted to EED, Germany.

18 representatives from the 5 Participant NGOs, along with Ram Esteves, Richie Ahuja and a candidate for the LCF Expert post attended a day long meeting at Accion Fraterna, Anantapur.

Along with many matters that were discussed, Ram Esteves presented his Audacious hypothesis on how to irrefutably prove Emission Reductions on lands under Sustainable Agriculture practices. Time targets were fixed for various steps, including the completion/installation of the Monitoring Solution.

A 2 day FCN-LCF Meeting was held at Bagepalli. Along with representatives from the 5 Participant NGOs, Ram Esteves, Sudha Padmanabha and Sandeep Loya from the FCN Tech Team also attended. A special invitee was Kirsten Gade, Programme Officer, EED.

The meeting started on a very happy note with Kirsten announcing that the formal approval of the year long Pilot Project had come through! This was a very good opportunity for Kirsten to get a thorough understanding of where the Coalition's efforts stood. Administrative decisions were taken and Accion Fraterna agreed to advance moneys to the Coalition even before actual EED transfers reached them.

A record number of 69 Participants attended this 2 day long meeting of the Fair Climate Network held at the Shadi Mahal, Bagepalli, after a gap of 16 months!

Ram Esteves welcomed the members with his Keynote Address and set the tone and tenor for a brisk and heavy agenda. 8 Client NGOs who were developing pro-poor CDM Projects shared their experiences to date. The 5 Participating NGOs of the FCN-LCF Coalition made their presentations, which were followed by a lively discussion on Low Carbon Farming. The Tech Team reported what they had done in the past 1 year and targets were revisited. Informed discussions were held on the post October 2012 continuity of the Tech Team after ICCO's generous start-up support ended.

On the 2nd day, deep and critical discussions on the setting up of an FCN Standard to certify Community Ownership and Carbon Revenue Sharing Arrangements in pro-poor CDM Projects was discussed. Matsy Kutty agreed to lead a working group to develop this further. Discussions were held on Cancun CoP16 and FCN viewpoints and positions that needed to be highlighted in Mexico were listed. After that we had a good discussion on the role of Social Entrepreneurs who set up Carbon Investment Companies. no2co2, Mumbai, shared their plans to mobilise the non-compliance market for pro-poor Emission Reductions in India. They were clear that they would be FCN Members first, and Carbon Investors next.

The meeting ended with concrete commitments on how participants and their respective organisations would take the agenda forward.